A Nigerian police officer has given the narrative of how a friend of his who lost his job due to the COVID-19 pandemic, got carried away by love and got scammed by his girlfriend. 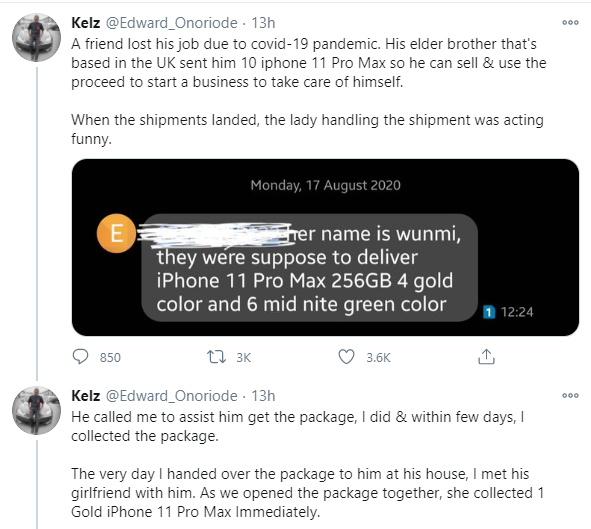 According to the officer, with Twitter handle, @Edward_Onoriode, his friend’s elder brother sent him 10 iPhone 11 Pro Max which he was asked to sell and start up a business with.

He shared that his friend’s girlfriend who insisted on taking one of the phones, also went on to scam him of the money he was supposed to invest in a business.

A friend lost his job due to covid-19 pandemic. His elder brother that’s based in the UK sent him 10 iphone 11 Pro Max so he can sell & use the proceed to start a business to take care of himself. When the shipments landed, the lady handling the shipment was acting funny.

He called me to assist him get the package, I did & within few days, I collected the package. The very day I handed over the package to him at his house, I met his girlfriend with him. As we opened the package together, she collected 1 Gold iPhone 11 Pro Max Immediately.

I know the cost of the phone, the purpose of the phone & financial condition of my friend so, I told her to return the phone bcoz it has a purpose. I also told her that when things fall in place for my phone, she will use a much better phone than iPhone 11 Pro Max.

She hesitated and insisted she must use an iPhone 11 Pro Max. Funny thing is, this girl is using a Samsung S9 while my friend is using an Infinix Phone. The person that owns the phones isn’t carried away to use an iPhone but you the girlfriend is insisting on using one.

My friend was carried away by love so, he couldn’t say a word. I was the one fighting the battle as if I’m the owner of the phones. There was no name this girl didn’t call me in the presence of my friend. My friend did nothing but just look.

I gave up and she took the phone. I and my friend went to computer village to meet the man which we’ve told about the phones before it arrival. He inspected all phones and made payment as agreed immediately. Over N2.7m for the nine iPhones sold was paid to my friend account.

I don’t know if my friend was jazzed, stupid or carried away when the money hits his account. All I know is that he didn’t invest any of the money into any business. Weekly, he upload pics and video of him and his girlfriend at expensive restaurants, clubs and fast food.

Each time I caution him, he will tell me not to worry that he’s working on something. He claimed he had kept N2m for the business he want to invest in. This is a guy that’s owning me 150k which I loaned him during the pandemic. I forced him to pay me ASAP before story enter.

After he paid me my money, he stopped taking my calls and I also stopped calling. After over three months, he called me yesterday crying that his girlfriend had ruined his life. He said all the money had gone.

The business he wanted to invest in which was suggested by his…Was a scam and the girlfriend had run away. He’s begging I should assist him with my connection get Police officers to trace his girlfriend and the guy that scammed him get his money back. I hissed and cut the call. I hate stupid people.

This is common by most young guys, they allow little money and their girlfriend to control them. As a man, always make sure you’re not carried away with girls or money. If you’re in love, love with your head and stop being STUPID.

Let me add this; I didn’t get to listen to him fully when he called yesterday bcoz I was pissed & irritated. I don’t know the details of the business he’s talking abt if his GF was involved with the guy that scammed him When I’m calm, I’d visit him, get full details & assist him