It was gathered that the victim, Charles Tommy, a graduate of Engineering graduate from the Afe Babalola University, Ado Ekiti (ABUAD), Ekiti State, was abducted on September, 1, at about 9:30pm along Goldie by Mount Zion, Calabar South Local Government Area.

Eleven days after, the family said they haven’t heard anything from the kidnappers, despite paying a ransom for his release.

The victim’s younger brother, Wonder Tommy, who confirmed the incident to a news portal on Thursday, September 10, said that Charles is yet to get a job since graduation. He said his brother was kidnapped in front of their gate and the kidappers are demanding additional N10 million after the family paid

“My elder brother was kidnapped right in front of our gate on Tuesday (1st September) evening around 9:00-9:30pm. The kidnappers got in contact with my dad (who is a pastor), negotiations began and they agreed to a certain amount which we paid on Friday (September 11). But still, they’ve refused to let him go,” he said.

“They are requesting for additional N10million (N10,000,000). We don’t have such amount of money. And the most scary part is that, they wouldn’t let us speak with him. My brother is a very peaceful and quiet guy.” he added.

Meanwhile, ABUAD Alumni released a statement on Thursday, demanding for the release of Charles.

“We call on all security agencies in Cross River State and beyond to find Charles Tommy and bring the perpetrators of this heinous crime to book. We also call on well meaning persons to assist us in any way they can in locating Charles Tommy. #ReleaseCharlesTommy
#SayNoToKidnapping 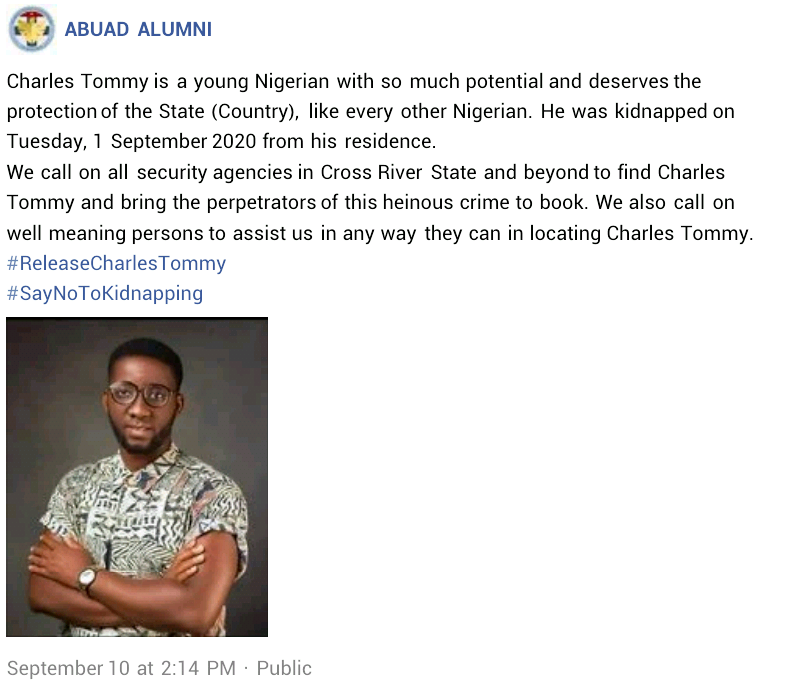 Twin sisters melt hearts as they both become medical doctors