Femi Fani Kayode, has reacted to the statement released by the Nigerian Union of Journalists. NUJ, condemning him for his clash with a Daily Trust reporter, Eyo Charles, in Calabar, Cross River state on August 20.

The NUJ in its statement released by its National Presidnet, Chirs Isiguzo, condemned FFK for his outburst at the journalist who according to the union was only asking a simple question. See the union’s statement below 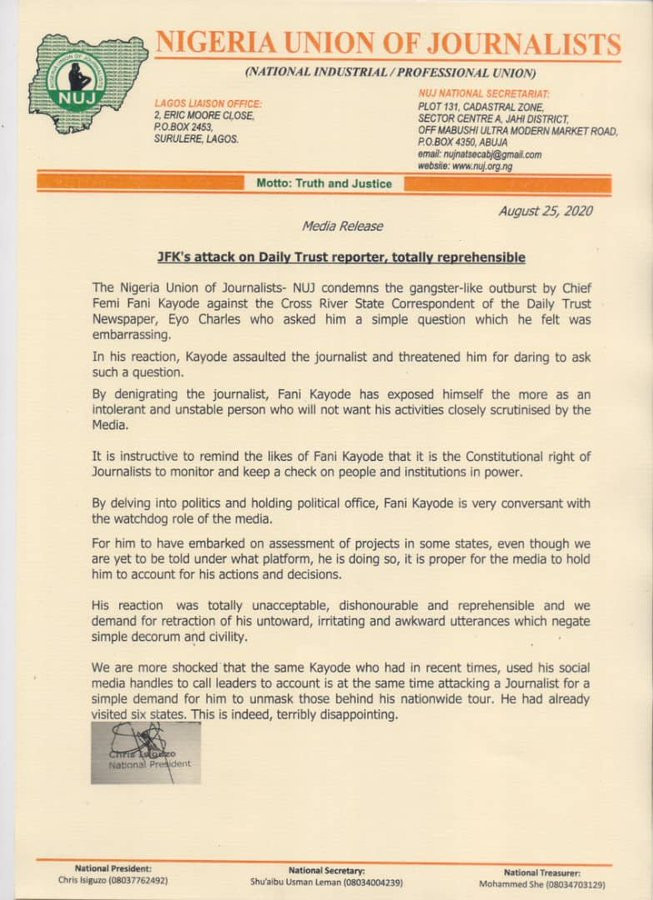 The Former Minister earlier today released a statement explaining why he went off on the reporter. Read here.

In an addendum he released later this evening, the former Minister said the NUJ got him all wrong and that it would have been better if they heard his own side of the story. Read FFK’s statement below

Permit me to add the following to my earlier statement. I have taken note of the report by Daily Trust on the incident. The content is false. I didn’t send any of my security men to threaten their reporter.

I only reprimanded him for a premeditated plan to embarrass me and he apologised thereafter. That was all.

This is not a battle between me and the esteemed Nigerian journalists who respect the ethics of the noble profession.

I have always been and will always be a friend to journalists and a champion of freedom of speech. What I will not accept are brazen insults from an  individual in the name of journalism.

The assertion or assumption that I am being bankrolled by anyone is deeply insulting.

Finally to the NUJ I say you have got me completely wrong. It would have been better if you had heard my own side of the story and established who was behind this whole incident and attempt to embarrass me, who paid for it and how much they paid before going to press. Nevertheless I still hold you in high esteem.

Plateau State Residents urged to defend themselves by House of Assembly