A woman was filmed sexually abusing a black dog as two men pinned the animal down.

The woman, Sarah Joanne Meredith, 41, claims she was forced to perform a sex act on the dog in exchange for drugs.

In the footage, the laughing men told her to “keep going”, the Liverpool Echo reports.

Describing the video, Ayra Ali, prosecuting, told Wirral Magistrates Court in Merseyside: “A black medium-sized dog is being held by an adult male with the dog’s back against his stomach.”

The dog kicked out as another male held its front legs, the court heard.

Ali said Meredith then performed a sex act on the animal, adding: “The defendant stated she was forced to do this, however, the footage shows otherwise.”

Sinead Fearon, defending, said: “The defendant is described as a vulnerable female, that’s clearly what she is.

“She was promised she would get drugs if she did what the males said.” 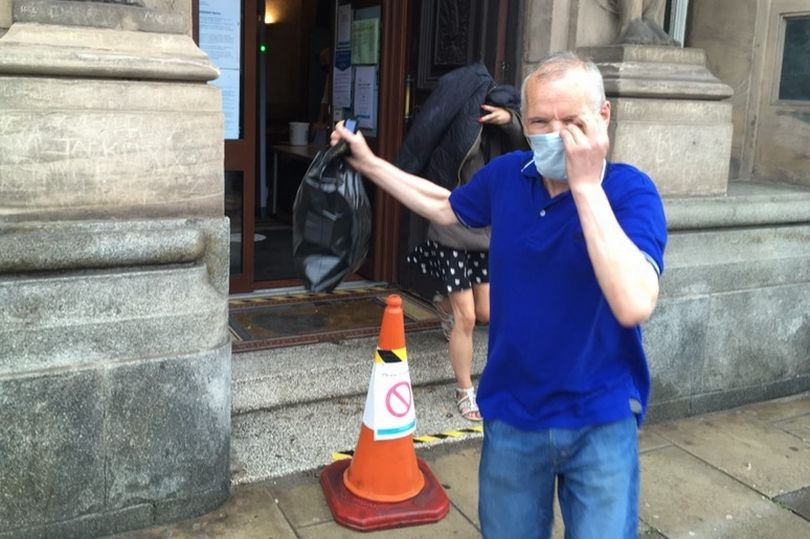 Sarah Joanne Meredith leaving court with her hood over her face

She said Meredith suffers from drug misuse, and relapsed following an incident which is currently being investigated by police.

Ms Fearon added: “The males haven’t faced any prosecution in relation to proceedings.

“The male recording it is subject to criminal proceedings but not the males described in the footage who were holding the dog and making directions.

“This experienced bench will have dealt with cases where people explain how desperate they were to fix their habit. I don’t think you will come across a case where someone has reached such low and such desperate measures.”

Referring to the presence of press in the courtroom, Ms Fearon said: “The embarrassment will stay with her not just for today but for a considerable amount of time.”

In 2016, Meredith “sorted herself out” but was the subject of a “heinous” crime in January this year.

She explained: “She started getting more desperate which demonstrated itself in the offence she has pleaded guilty to.”

Speaking directly to magistrates herself, Meredith said: “I have had a serious mental breakdown. I am on the list for rehab in Macclesfield.”

Today’s case was adjourned by magistrates’ to allow a report to be prepared.

Meredith was released on unconditional bail until her next appearance on September 21.

The man accused of filming the act was also due to appear in court charged with possessing extreme pornography.

Philip Thomas, 60, of Beckwith Street, Birkenhead, failed to attend today’s hearing and a warrant was issued for his arrest.