A Nigerian journalist, David Hundeyin has revealed how Boko Haram was allegedly born in Nigeria.

Hundeyin who accused the north of incubating a monster that is beyond being tamed now, said he lost his sympathy when he worked on origins of violence in the north in 2019.

When I worked on a report on the origins of violence in the north last year was when I lost all sympathy. They actively incubated a monster that is beyond being tamed now. I’m going to reveal something in this thread that I guarantee most of you have never heard of before.

Are you aware that those in charge of northern Nigeria’s political Islam establishment spent decades pacifying their horrendously poor constituents by promising them the land belonging to northern Christians once Sharia was implemented? Let me give you a background.

Due to monogamous marriage which limits their population expansion, northern Christian land inheritance is largely linear, i.e the number of descendants fighting to inherit land from the father is limited, which gives them economic leverage in an area where land is the only asset

Northern muslims on the other hand, have extremely diluted inheritance because the patriarch can have 4 wives and 17 children, 8 of whom might be male. Simply put, there is not enough land to go round which leads to extreme wealth disparity within Muslim areas.

This is why Sharia was championed by northern political actors and enthusiastically welcomed by northern proles – it was a bone for politicians like Yerima to throw to the masses, and the masses genuinely believed that land belonging to the ‘arne’ would be distributed to them.

Sharia came, and the promised expropriation and redistribution didn’t materialise. Bear in mind that young northern men, contrary to popular belief, actually want more from life than poverty and ruin. The promise of taking over arne property was a REAL source of hope for them.

Ustaz Mohammed Yusuf, a charismatic preacher in Maiduguri saw this groundswell of resentment and took advantage of it, cultivating his Salafist group into a political force in Borno state. Boko Haram as at 2007 actually nominated a commissioner to the Borno state cabinet.

The disagreement came when Governor Ali Modu Sheriff refused to follow through on his (politically expedient) promises to Boko Haram, including seizing land belonging to arne and distributing it to economically disenfranchised young Muslim men.

Yusuf went rogue and in July 2009, the Nigeria Police Force got involved the only way it knows how to, extrajudicially executing him in full view of everybody outside the Maiduguri police HQ. Yusuf’s deputy, Abubakar Shekau then took over. And the rest is history. 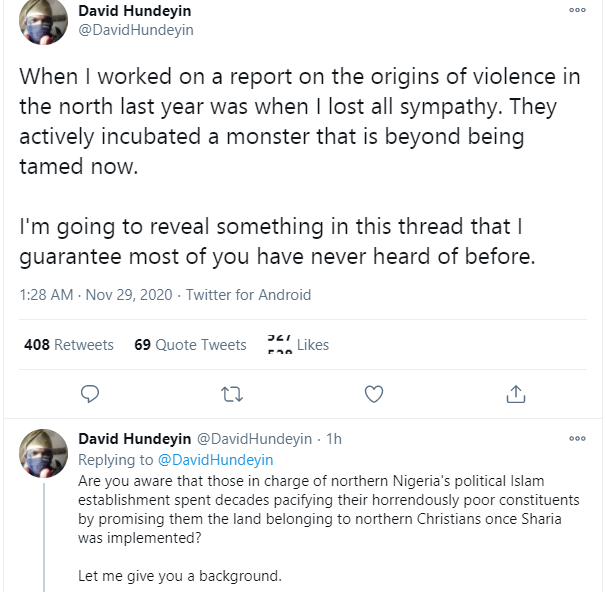 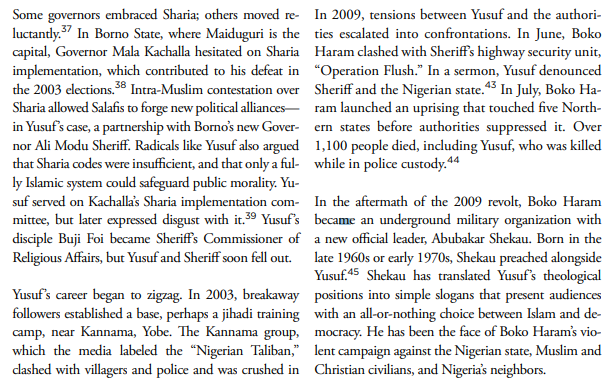 Man, his pregnant wife and their three daughters found dead inside their apartment in Enugu.