Bernie Sanders predicted the results of the US presidential election last month while appearing on a TV show.

A winner has yet to be declared in the presidential election, with neither President Donald Trump nor Joe Biden near the 270 electoral college votes needed to win. However, Trump has already claimed victory in a number of key swing states whose counts have yet to be called, and claimed that the election is a “fraud” which he will be taking to the Supreme Court.

Trump’s speech has shocked many but it turns out Senator Bernie Sanders predicted the outcome back in October.

While appearing on the Tonight Show Starring Jimmy Fallon on October 24, US Senator Bernie Sanders, who dropped out of the race for the 2020 Presidential Election after facing a series of losses to Joe Biden, predicted the possibility of Trump prematurely declaring himself President even before the counting of the ballots. 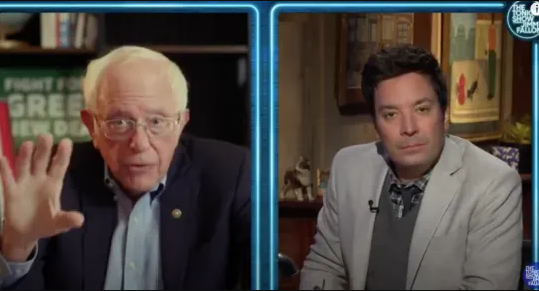 Fallon had asked during the show: “Although the election is November 3rd, and it’s been said that we won’t know the results until days later, when do you think we’ll know the results?”

Sanders, who was previously in the running to be the nominee for the Democratic ticket, said: “Jimmy, you raise an important point, and I hope the American people understand it, because this is something I worry about. My view is every vote must be counted.

“For reasons which I don’t have the time to get into tonight, you’re going to have a situation, I suspect, in states like Pennsylvania, Michigan, Wisconsin, other states, where they are going to be receiving huge amounts of mail-in ballots. And unlike states like Florida or Vermont, they’re not able for bad reasons to begin processing those ballots until Election Day or maybe when the polls close. That means you’re going to have states dealing with perhaps millions of mail-in ballots.

“Here is my worry. What polls show, and what studies have shown, is that, for whatever reason, Democrats are more likely to use mail-in ballots. Republicans are more likely to walk into polling booths on Election Day. It is likely that the first votes that will be counted will be those people who came in on Election Day, which will be Republican.”

Sanders continued: “And here is the fear – and I hope everybody hears it – it could well be, you know, I don’t know what’s going to happen, nobody does.

“But it could well be that, at 10 o’clock on election night, Trump is winning in Michigan, he’s winning in Pennsylvania, he’s winning in Wisconsin, and he gets on the television and he says ‘Thank you Americans for re-electing me. It’s all over, have a good day.’

“But then the next day, and the day following, all of those mail-in ballots start getting counted, and it turns out that Biden has won those states. And Trump says, ‘see? I told you the whole thing was fraudulent. I told you those mail-in ballots were crooked. And we’re not going to leave office.’ So that is a worry that I and a lot of people have.”

As Sanders predicted, Trump gave a speech on election day, claiming victory even as the counting of mail-in ballots in four states remains underway.

Watch the video below.

man… he called it WORD for WORD. pic.twitter.com/9uBn1Sm8xa

Doctor in federal medical center killed and burnt in Zamfara

Extracts of Kyari’s conversation with ‘Hushpuppi’ that implicated him

Federal Government to re-introduce toll gates across the country