A woman pushed her friend into a reservoir before both of them drowned in a disturbing incident captured on CCTV.

CCTV footage recorded in China shows two women standing near the edge of the water in the city of Nanjing when one of the women bends down to tie her shoelace.

The woman in orange who had bent to tie her shoelace can be seen struggling as the woman in black holds her down.

Police confirmed that the pair drowned in the bizarre incident in the eastern Chinese state of Jiangsu, Yahoo News reports. 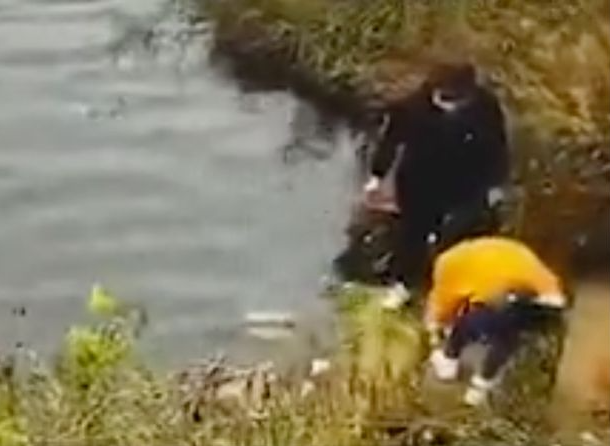 CCTV footage of the shocking event on Wednesday, October 21, has gone viral in China, with an investigation launched on Thursday, October 22.

The video has been shared on the Chinese Twitter-like social media site Weibo, with the clip being viewed more than 500 million times to date.

After the video quickly circulated online, Lishui Bureau of Nanjing Public Security Bureau confirmed on Saturday that a probe had been launched.

Speculation has grown online as to what led to the shocking events.

Police are expected to release the details of their investigation into the two deaths in due course.

Below is a video showing of the incident.

‘I’d been expecting her to have hair because of the scan, but to see this beautiful baby with this thick jet black hair was incredible. ‘It had already grown so long it was down past her ears. ‘Even the nurses and the doctors turned to me and said they’d never seen a baby with so much hair in all the time they’d worked at the hospital!’ ‘We couldn’t leave the house without someone complimenting Maya on her hair,’ Alexandra said. ‘Lots of people would ask, “How old is she?” ‘They were shocked when I told them she was only three months old with so much hair!’ Alexandra says that her daughter who just turned one, has hair so long that it skims the top of her nappy. She said: ‘I’ve never had her hair cut. I think it’s absolutely beautiful and I want her to grow it as long as she wants.’ Maya now shows off her different hair styles on her own Instagram page with 300 followers. ‘Maya’s really good she always sits still and lets me do her hair,’ said Alexandra. ‘I do it in plaits and sometimes I tie it in a ponytail. ‘I love putting bow clips in her hair. I have different colours, like pink, blue, red and yellow, to match the different outfits that she wears.’ ‘I shampoo and conditioner her hair every day,’ said Alexandra. ‘Then I brush it through and spray on some stay-in conditioner and dry it with a towel. ‘It takes about 20 minutes, which is quite a long time considering I’m doing a one-year-old’s hair.’ ‘People love looking at pictures of Maya – they can’t get enough of her hair,’ she said. ‘I usually post pictures of her different hairstyles or of her playing with Kadin. ‘But the comments are always about how amazing Maya’s hair is.’ Alexandra says she has no family history of babies with hair. She said: ‘I’ve asked around my family and Lee’s to see if anyone else was born with hair like Maya’s, but everyone’s told me no, so it must’ve just been a fluke. And it’s weird that she has such dark hair, as when Kadin was a baby, he had such fine blond hair.